Skip to content
March 28, 2015November 3, 2016
I said that this year I wanted to be less afraid, I wanted to push myself beyond perhaps what I deemed comfortable and safe. A few days ago a new opportunity was put in front me and, rather than nodding my head and thinking ‘that’s cool’, but ultimately brushing it off and taking the safe option, I said yes. And now I can say that just two days ago I sat myself down in front of Alfie and Harry — the two Irish lads who make up the band Hudson Taylor — and interviewed them for the student radio. I then got to watch them perform a few of their tracks from their, soon to be released, album, and float in my own little, happy bubble for the next a hundred years.
I’ve been a fan of there’s for just over three years now, so getting to talk to them and hear about theie process of songwriting and just how much performing really does mean to them was almost like coming full circle. It was wonderful, honestly. I couldn’t of asked for a better first interview. They were both just so chilled and genuine and friendly, and I don’t want to say the cliché ‘it was like talking to my friends’, but it kinda was like that (even if I did probably freak them out with my screechy laugh).
I had the pleasure of talking to them for a good twenty minutes, and it’s been uploaded in the form of this sweet little 5 minute bite if you want to give it a listen. (The other fifteen minutes are just for me at this point.) (Maybe I should upload it in full for the laughs, but that sounds like a lot of work.) 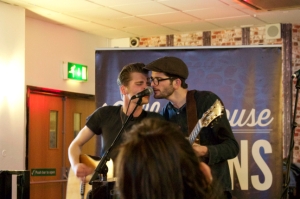 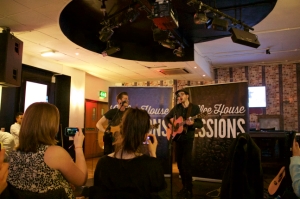 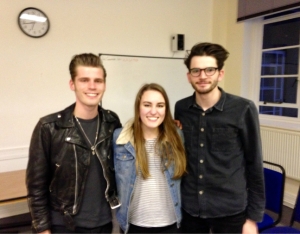 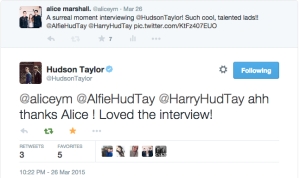 I also did a video blog of the day, capturing some actual real life feels, and that. Maybe you’d like to take a watch? (You can skip my face and get to the performance bits if you’d prefer, I won’t be too offended.)
It’s probably a little (read: a lot) lame to say, but I’m feeling very proud of myself right now and what I have managed to achieve so far in 2015, and also in second year. I’m finally doing a lot of things I’ve been too stuck in my head about and that includes making these silly YouTube videos. I hope the year continues to play out a little like this.

Always a reader, trying to be a writer and definitely a wholehearted intersectional feminist. Never without sharp winged eyeliner. Journalism graduate. Gryffindor.